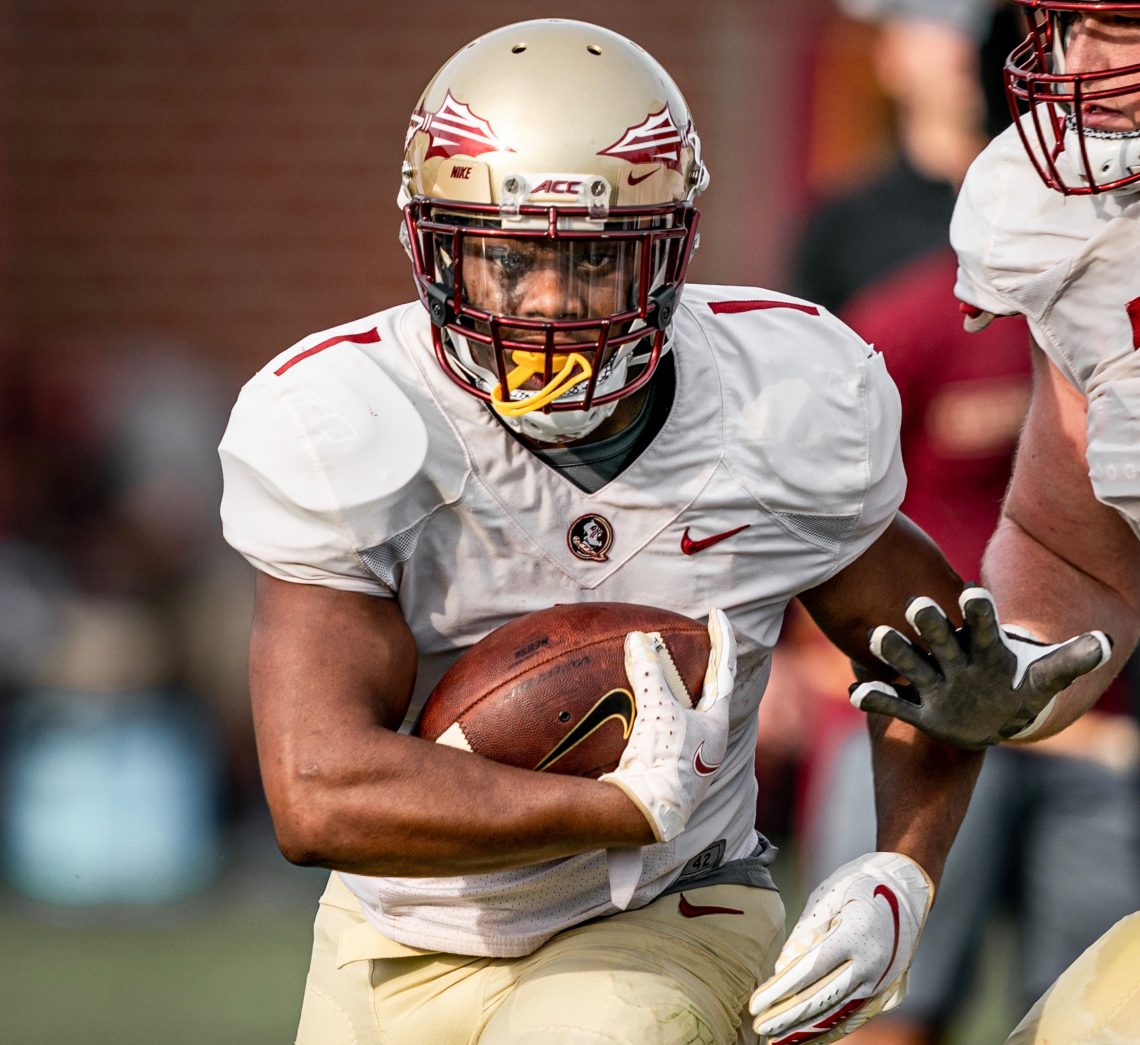 Florida State opened spring football practice last week in search of answers at numerous positions. Three practices into the spring, the good news is the Seminoles look to have more players capable of answering those questions than in 2020 in each position room. The other good news is it looks like Mike Norvell’s staff will have a full spring to find those answers, which was denied after the third practice of Norvell’s first year due to Covid closures.

Each week we will share observations about what we see on the practice field as coaches work to develop answers to each of the question marks heading into the Seminole 2021 home opener with Notre Dame.

1. Norvell has opened practice to the media for the first time since the Covid shutdown one year earlier. To ensure safety, the media watches from the upper level of the baseball stadium, which overlooks the practice fields. All interviews are conducted by zoom video. Open practices allow us to provide you these observations.

2. Practices are very organized and up tempo. The pace of practice is much quicker than we witnessed in 2020 when the coaches were installing their practice plan and standards. With that now behind them, the pace is fast. Norvell practices are reminiscent of the Bobby Bowden era when college coaches from all across the country would watch FSU’s practices to learn how to maximize development.

3. There are multiple segment drills being run on each of the outdoor practice fields and in the indoor practice facility. The energy is high with coaches correcting technique and players encouraging teammates. Everyone, coaches included, sprint from one station to the next. As Norvell, a former receiver, was sprinting to a drill at midfield, he challenged freshman Robert Scott: “Don’t let me beat you, Rob.”

4. Norvell doubles the number of early practice plays by simultaneously running the first team from the 40 to the south end zone, while the second team runs plays toward the north end zone.

5. After each play, as players are sprinting back to the huddle, coaches are running alongside offering instruction.

6. The first week was energetic and much more spirited than the three practices of 2020, with veteran players helping the younger players. It is an early indication the players are taking ownership.

7. McKenzie Milton looks good to go. We heard positive news about Milton’s two-year rehabilitation of a brutal injury, which nearly cost the Heisman candidate his right leg, but had reservations until we saw him take snaps this week. What we saw was very encouraging. The former UCF star – who is wearing a no-contact, green jersey – bobbed and weaved to avoid oncoming defenders with ease and showed acceleration when chased from the pocket.

“Still trying to get to the point where the offense is second nature,” Milton said after Friday’s third practice of the spring. “I feel like the only way to get there is just continue to get in my playbook and continue to get those reps. And not just live reps but mental reps when other guys are taking reps. Just continuing down that path, but I feel I feel very confident out there.”

8. Jordan Travis is running with the first team and competing for the starting job. Milton has made the quarterback room a more competitive space and all four quarterbacks are likely to finish spring the better for it. Chubba Purdy is throwing the ball well, which is good news after sustaining a collarbone injury that required two surgeries last fall. Tate Roddemaker, Purdy and Travis all appear more decisive with their throws and showing more arm strength.

9. Too early to tell who will be the starting quarterback for the opener but it’s not to early to say FSU will have better quarterback play next year due to the competition.

“It is probably going to play out,” offensive coordinator Kenny Dillingham said. “We got four guys that all have playing experience. So that’s gonna play out.”

“Those guys are competing in all aspects,” Norvell said. “I thought they did a good job with it today. McKenzie, I thought it being his first day, it looked like he had a nice control of what we were asking him to do. There were some good plays and some bad plays. … Jordan looked really good. Chubba, Tate made some really nice throws. That group is going to be fun to watch. The diversity and talents, but also the approach that all these guys bring to it and the competitors that they are, it’s a really good group at that position. We’re going to continue to get better and those guys are going to push each other.”

11. Robert Scott, Lucas and Smith have won their share of battles in one-on-one drills against FSU’s defensive linemen and have been the leaders of the line in Love-Taylor’s absence.

“I think you’re seeing the development, the overall strength of our offensive line,” Norvell said. “Really, really pleased with the steps that they’ve taken. Obviously, we are going to have to have a great summer as well leading up to the season. But we’re definitely a stronger football team than what we’ve been.”

13. FSU has questions at receiver but more options than usual. I count nine wide receivers who can help, which is more than FSU has had in a long, long time. They include Jordan Young, Keyshawn Helton, Ontario Wilson, Bryan Robinson, Kentron Poitier, Darion Williamson, incoming freshmen Malik McClain and Joshua Burrell and walk-on Parker Self.

14. Of those nine, Robinson has flashed the brightest. Robinson had a good camp in 2020 but sustained a preseason injury and was not at full speed in 2020. He’s big (6-1, 208), smooth, has soft hands and adjusts well to the ball. The freshmen who enrolled early – McClain and Burrell – look well evaluated. McClain is a smooth 6-4 receiver with good hands. Burrell is a physically-gifted receiver who posted a 500-pound squat, unusual for a 17-year-old receiver.

I’ve been impressed by Williamson, who Norvell has also noted in press conferences. And I continue to be impressed by the walk-on Self.

We’re still seeing too many drops but with this many receivers competing, receivers coach Ron Dugans has options and can use the bench to incentivize focus.

15. Three running backs stand out: Lawrance Toafili, Jashaun Corbin and D.J. Williams. All three will contribute. Toafili may be the most fluid of the three in terms of changing lanes and accelerating. Corbin played last year after rehabilitating a knee injury and has had a great offseason of strength. He’s powerful and we’ll see if he’s gained another gear. Williams is a transfer from Auburn who will compete for totes. He has a thick base (5-10, 222) and power too. All three catch the ball cleanly with their hands rather than against their body.

16. Norvell’s offense features tight ends in both the passing and running game. Jordan Wilson (6-4, 262) seems to be the prototype but hasn’t practiced while rehabbing a knee injury. In his stead, four or more are competing, including Camren McDonald, Preston Daniel, Wyatt Rector, Markeston Douglas and Jackson West. The first thee played a lot last year. The newcomers include West, an early enrollee, who is a long and athletic-looking. Douglas, a freshman, is a surprisingly agile receiver at 6-4, 289. He can run and catch like a tight end and his size could be an asset in the running game. You’ll see him become a shape-shifter in the coming year.

17. FSU’s defensive front four accounted for only three sacks last year, so all eyes are on this segment, which must improve its productivity for FSU’s defense to get better. The most-likely first team would include two of the following three inside: Robert Cooper (6-2, 335) or Fabien Lovett (6-4, 315) at nose guard and Lovett or Dennis Briggs (6-4, 279) at tackle. All three have had their moments of success in one-one-one drills against the offensive line and in controlled scrimmages. South Carolina transfer Keir Thomas (6-2, 275) will help in the fall but has been held out of practices thus far.

The defense responded in the first day in pads, dominating the offense with a fierce pass rush.

“Our defensive line has got a good understanding of what we are trying to ask them to do right now,” defensive coordinator Adam Fuller said. “The volume of reps has been good. With Odell (defensive tackles coach Odell Haggins) and JP (defensive ends coach John Papuchis), I’ve seen some steps in the right way as far as the energy level that group has played with.”

18. The Seminoles are looking for two ends who can rush the passer and contain the edge. Georgia transfer Jermaine Johnson (6-5, 260) has made a huge impression in scrimmages and drills and looks to be an answer for one of the two ends.

“Jermaine is all the things that we were expecting him to be in the type of person, the work ethic, the ability that he has,” Norvell said. “That’s showing up. We’ve seen him in big-time Division I football games making plays, so that playmaking ability is not something that’s shocking to me. The thing that I’ve been really pleased with is just the energy that he brings, the work ethic, the determination, uplifting his teammates. Really being a great leader for that group as well by what he’s willing to give and how he’s trying to help build up the other guys as well as going out there and playing at a high level.”

19. FSU would like to see improvement at linebacker and have more bodies to work with than usual. Amari Gainer (6-4, 230), Emmett Rice (6-2, 227) and Stephen Dix (6-2, 231) have the most playing time and likely starters in a 4-3 defense. Gainer is slightly bigger. Along with Gainer, Rice and Dix are looking to build on the progress made last season. Freshman DJ Lundy, who also received playing time, Kalen DeLoach, Jaleel McRae and Jayion McCluster are competing for playing time.

“That linebacker group is going to be just another year better seeing the emergence of Amari getting comfortable in that role, Emmett (Rice), Stephen (Dix), D.J. Lundy and Jaleel McRae, Kalen DeLoach. Just the reps they are getting,” Fuller said. “It already feels like one year better. The virtual off-season stuff has really helped them.”

20. FSU’s secondary struggled last year, partly due to the lack of a pass rush. That hasn’t been an issue yet this spring as the defensive front enjoyed three sacks in one controlled scrimmage – two of which were aided by smothering coverage. The starting four or five early have included cornerbacks Jarvis Browlee and Jarrian Jones with safeties Brendan Gant, Travis Jay and South Carolina transfer Jammie Robinson. Others are pushing, so stay tuned.

“In the secondary, it’s a bunch of pieces that we’re putting together right now,” said Fuller. “We’re trying to simplify it for these corners, just so we can get that technique down really good. I think some of these newcomers have brought some good skill sets to us. It’s just making sure that we’re playing the ball in the right way. So I think I’ve seen some growth as far as collectively with the group right now. It’s got to continue.”

21. Norvell spends an appropriate amount of time on special teams, evaluating personnel for coverage and return units and working on execution. Alex Mastrommano looks to be the punter, and Ryan Fitzgerald and Parker Grothaus handling kicking duties.

22. You can see it all for yourself on Saturday, April 10 at the annual Spring Game. Tickets to the game go on sale to season ticket holders on Monday. Call 850.644.1830 line 1 for information. 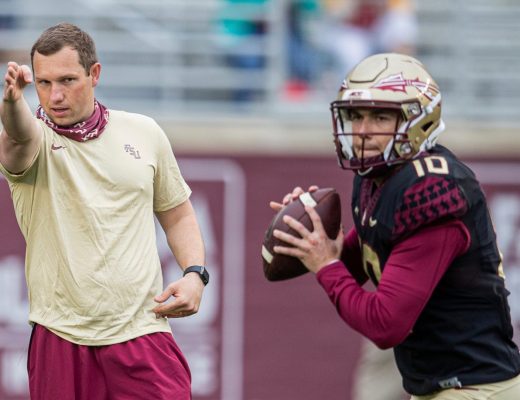 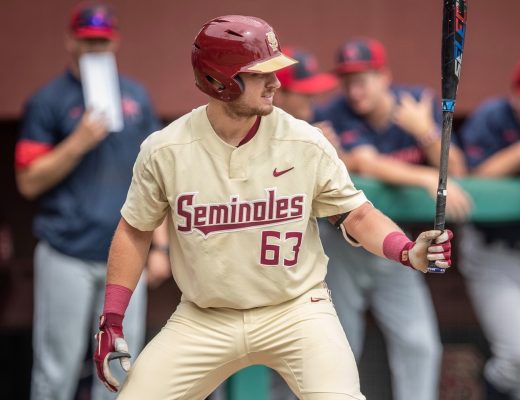 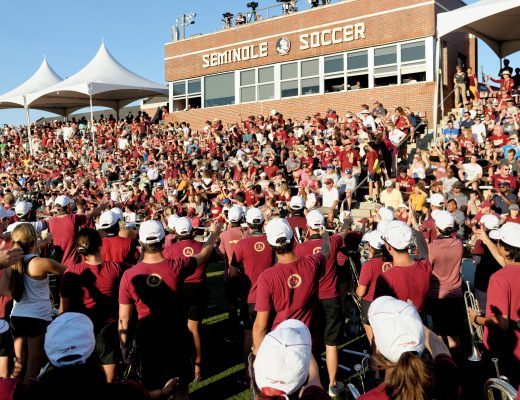