With hopes and aspirations to earn an athletic scholarship for football at Florida State, Deonte Sheffield signed with the Seminoles as a preferred walk-on in 2017 as a three-star prospect out of Niceville, just north of Destin, Fla.

The initial promise of a scholarship by Jimbo Fisher went out the door figuratively and literally when Fisher left Florida State to coach at Texas A&M. Despite working hard on the scout team, Sheffield’s work didn’t translate into a scholarship under new head coach Willie Taggart, who had no obligations to fulfill a promise they didn’t make.

Sheffield would have to prove himself all over again.

Sheffield finally saw the field in 2019 after two years on the scout team. He appeared in four games and scored his first touchdown in a 49-12 win against Alabama State. He then started in the Sun Bowl against Arizona State in replacement of Cam Akers, who was preparing for the NFL Draft. Sheffield turned in one of the best performances on a day when Florida State struggled offensively.

Sheffield rushed for 87 yards on 18 carries and caught a pass for 1 yard in a 20-14 loss. If not for yet another coaching change, Deonte might have earned his scholarship then and there.

In his first season under coach Mike Norvell, Sheffield appeared in all nine games on special teams. And while not contributing in quite the way he envisioned, Sheffield impressed Norvell with his work ethic (a recurring theme with this coaching staff).

Norvell awarded Sheffield his long sought-after scholarship in August 2020. And nearly four years after walking on, Sheffield earned his degree too.

“It’s a blessing,” Sheffield said. “My mom, that was one of her biggest things for me – to graduate. That’s what I love most about graduating. To walk across the stage and making her happy and smile.”

With his whole family in attendance, Sheffield is graduating with a degree in Sociology. His degree will allow him to coach football at the high school level. A degree in sociology will allow Sheffield to to give back to the game that he loves.

“I’ve always wanted to just stay around football since I love it so much,” Sheffield explained. “To get back to the communities and give back to other youth and coach and train little kids.”

It’s not rare for players to want to give back to their communities, once they leave football or retire from professional play. You see the fingerprints of Florida State Football alumni all over the country. Deion Sanders is head coach at Jackson State. Former players Odell Haggins and Ron Dugans have coached multiple seasons at Florida State. There are literally hundreds of others who have gone on to coach at various levels.

Sheffield may be able to offer a unique perspective as a coach.

Most of his collegiate career has been spent grinding and working towards a scholarship and his degree – an experience that is not uncommon among college athletes. Everyone aspires to make it to the NFL, but how does that mindset change when you are fighting for more than just an opportunity to play?

“Football is only going to last for so long,” Sheffield said. “But a degree can last forever. So my advice would be to take school seriously from Day 1. When you get on campus until the day you leave and try to get a degree before you try to get to the NFL. Most people just try to leave early, and it doesn’t work out in the NFL. Then they have nothing to fall back on. But if you take school seriously and get a degree with the time you have here with a free education, that’s important.”

According to Sheffield, it’s a sentiment that Head Coach Mike Norvell and his staff also strongly share.

“I’ve been through three coaching changes, and I feel like  school is huge with this coaching staff,” Sheffield said. “They push you hard to get your grades and go to class – all those things.”

With his degree secured, Sheffield will look to have his best season yet at Florida State. With a restocked running back room in an offense “made for playmakers,” Sheffield will have the opportunity to focus on making a contribution to the football program.

“I feel really strong about the direction we are going,” Sheffield said. “Just like Coach says, the climb we have, the commitment, and the little things. I feel like it’s real with Coach Novell. He knows what he’s talking about.”

While the Sun Bowl against Arizona State was his favorite moment at Florida State, he is eager to find a new one for the school he has worked so hard for and loves dearly.

“The tradition…  all the greats that already came before us like Deion, those kinds of people. Other schools can’t say they have that tradition we have from back in the day and all the championships we’ve won, the Heisman winners we have. That’s what I love most.”

The One Tribe Campaign

In a quest to achieve more, we are excited to announce the launch of the One Tribe Campaign! Your 2021 Annual Fund contribution will strengthen our Annual Membership in support of the following areas of Athletics: coaching, support staff, sports medicine, academics, mental health, nutrition, scholarships, professional development and COVID-19 response.

Thank You For Choosing Our Team!

Thank you for your continued support of Florida State Athletics! Florida State Athletics simply can not compete for championships or provide the educational and leadership opportunities for student-athletes without you. You are a vital part of the team. If you have questions about giving or benefits, or would like to make a contribution over the phone, please call us at (850) 644-1830 or visit FSUonetribe.com.

Previous Post Get to know a grad: Rebecca Moynihan Next Post 'You should see it in color' 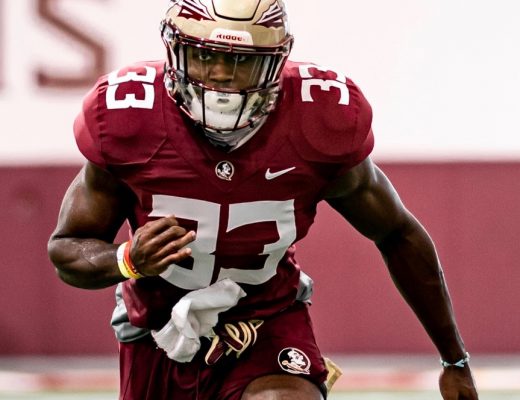 Amari Gainer was third on the team with 69 tackles in 2019. (photo by Kyle Pulek)
FSU Sports
FSU bloodlines run deep for Gainer 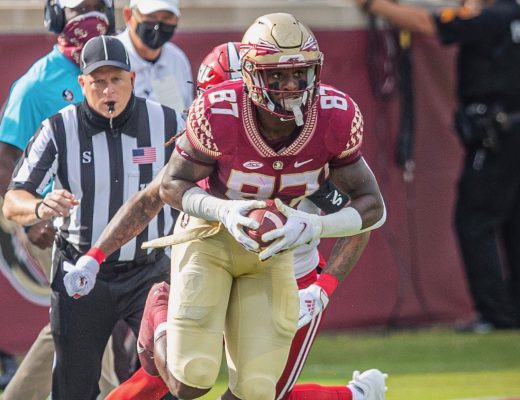