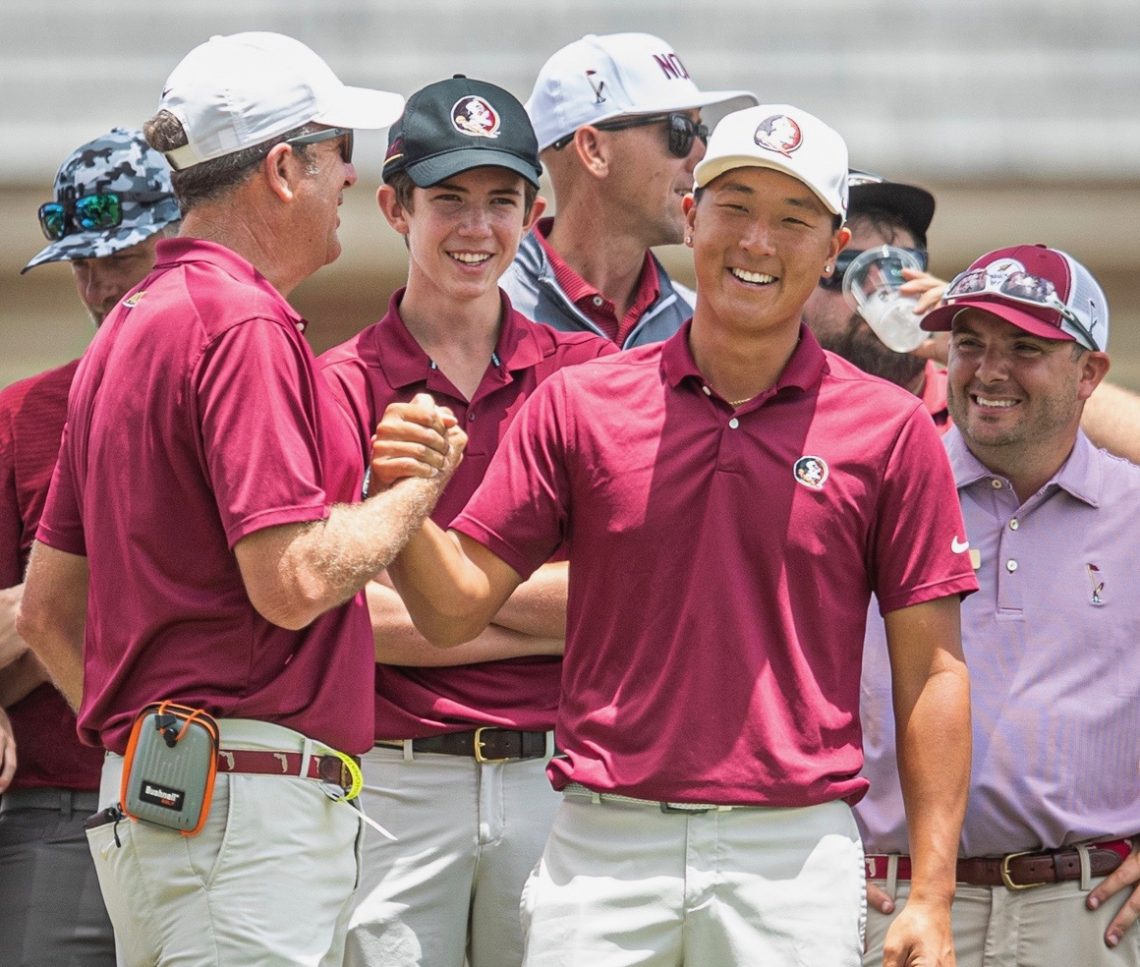 The NCAA Regional success follows a seven-figure investment in construction of the Seminole Legacy Golf Course and team training facility, considered to be among the best in collegiate golf.

Golf coaches and players think not.

The golf facility demonstrates what is possible when the university, athletics, Seminole Boosters and its donors and the City of Tallahassee align their priorities.

The project is part of the Gateway Project to connect downtown Tallahassee, FSU and FAMU to the airport which was a priority for the city and for FSU President John Thrasher. While the city will fund more than seven miles of roadways and sidewalks, much of which will have the effect of connecting strategic parcels of FSU land south of the main campus (FSU-FAMU College of Engineering, WFSU, the Morcom Aquatics Center, Alumni Village, as well as Innovation Park), the cost of the golf course was funded by the university, athletics, Seminole Boosters and its donors through the Unconquered Campaign.

According to the Unconquered press release in August of 2018, “The Don Veller Seminole Golf Course will receive an $8 million renovation by the Jack Nicklaus Design Group.  When it reopens in the fall of 2019, the course will be transformed into the nation’s first Nicklaus Legacy Course.  This special designation will make it a bucket list destination for golfers visiting Tallahassee and help the Seminole Golf Program attract the nation’s best student-athletes.  It will also serve as a first investment in the creation of the new “Gateway District” which includes a scenic road connecting the Tallahassee International Airport and the FSU Campus.  The Gateway District, which includes over 900 acres owned by FSU, will be a key for the future growth of the university.”

While FSU and the community have been enjoying the Seminole Legacy Golf Club for several years now, the course was officially introduced to NCAA Regional competition this past month.

“All around the country, schools are building really, really nice facilities for their teams and you are seeing so much more success from these guys coming right out of college and going to the PGA Tour and this is one of the reasons why. We are getting them prepared a lot earlier and facilities like this are the cause and the reason for it,” longtime University of Georgia men’s coach Chris Haack said of the golf training facility and Nicklaus designed golf course.

Haack’s teams have won both of Georgia’s national titles (1999 and 2005) as well as 66 team tournament titles. His alumni golfers, led by Bubba Watson, rank third among all colleges in PGA winnings (over $177 million) as of February 2021, according to Golf WRX. Florida State’s alumni rank 11th with $112 million, led by Brooks Koepka.

“It’s a really good golf course,” Haack said. “It’s hard. It’s long. It pretty much challenges every shot you’ve got to hit. The green complexes are pretty tough; you’ve got to ball strike it around here. There’s a couple of holes out there where I thought Nicklaus must have been angry when he put those bunkers in but it’s a great test of golf and it makes these guys better.”

Hosting this 2021 NCAA Regional Golf Tournament was a dream come true for Seminole Golf Coach Trey Jones, who had to pinch himself when he saw the banners going up and the tents coming in.

“It’s something that has been on my mind for 18 years, how to get a championship golf course and then how to host any tournament in the world on it,” Jones said. “I can’t tell you how thankful I am for President Thrasher, Ed Burr and all the donors, our Seminole Boosters, who allowed it to happen.”

Florida State’s John Pak, who chose to come back for his fourth season, said he got emotional walking up the daunting 18th fairway for the last time.

“That was really special,” Pak said. “I have been here four years. Everyone here is like family to me. They have done so much for me. It was a really special moment and something I will never forget.”

When asked about the golf course, which has been under construction for most of his career, Pak said, “It’s awesome. It just proves to a lot of people that (FSU is) doing a lot to create a program that is supposed to be at the top. I think it shows with the team we have, how much better we’ve all gotten throughout the year. It’s awesome to have somewhere this special to play every day.”

The golf course, as well as the NCAA Regional title, began with a simple question, Jones said. “President Thrasher asked me what the golf program needed and I said, ‘A golf course redesign.’ ”

The scope of the redesign changed dramatically once Jack Nicklaus and his son Jackie became involved in the project. Nicklaus, an Ohio State graduate, has developed a relationship with Florida State over the decades as many of his children and grandchildren attended the school and are became alumni. In surveying the sprawling track of land that was the old Seminole golf course, Nicklaus had a vision to design the very best collegiate golf course in America.

“It’s a creativity golf course,” Jones said. “It looks like it’s open off the tee and you can’t really lose a ball but if you don’t hit it in the right spot, you are not going to be on the green and you can’t score from those areas. For a higher handicap player, it is fun; you don’t look for balls all day long. For a low handicap player, you still have to be precise. These fairways are not that big. The bunkers are in the perfect place and the green complexes will challenge any player in the world.”

Georgia Tech head golf coach Bruce Heppler, whose Yellow Jacket teams have played on the best courses in the country – winning 65 tournaments in his 25 years – spoke enthusiastically about the course. His alumni rank 6th in PGA earnings ($173.9 million), led by Matt Kuchar.

“I think (the course is) tremendous,” said Heppler. “It looks like it’s wide open but they did an incredible job of putting the fairway bunkers in just the right places. It’s a really neat layout, one of the best university courses there is. It’s a golf course where good teams, good players, will play well. You have to do everything here. If you don’t, you are not going to play here. It starts with driving but you really have to do everything here, which is kind of what you want from a golf course is to challenge every aspect of a kid’s game. It’s a great place.”

“The Nicklaus Group did an amazing job out there,” Jones said. “There’s so much flexibility. You can play it so many different ways.”

When you look at Florida State’s winning score, 34 under over three days, you may think the course is easier than it is.

“The course played soft and the course wasn’t designed to play soft,” Jones said. “They want the balls bouncing and moving around the greens. Due to some of the challenges we’ve had here lately, we weren’t able to get them hard and fast.”

The coaches and players were thankful for receptive greens and shudder to think how challenging the course could be in 2024 when the NCAA Regionals will return to the Seminole Legacy Course and the course if fully grown in.

Jones is thankful for his players, who now have a place to call home.

“The players who are on this team, the older guys, have had to go without a golf course and we didn’t have a practice facility for a while,” Jones said. “They never complained but it took a toll on us. We weren’t as prepared as we wanted to be at times for different events but they saw the betterment of the program instead of themselves as true Seminoles would.”

Now they have both a practice facility and a golf course in one place.

“We spend probably more time in our team training facility than we do on the golf course.” Jones said. “We go to the golf tournament and when we come back evaluate where we are, probably similar to the football team, where they spend more time practicing than they do in Doak Campbell Stadium, but you have to get out and play and that’s the really important thing.”

Believe it or not, Jones said, he tries to get players not to hit as many golf balls as they want to hit. Instead, the focus of the training facility is on scoring.

“When you see the actual place where we are hitting balls, there’s a lot more going on there than you think of a person just rolling up and hitting balls,” Jones said. “The scoring aspect, we put a lot of emphasis on. We start every day with short game work, whether it be chipping, putting, something with wedges. We use the first two hours of their time that way before we break up into different type of things. We need to teach them how to score.”

The team training facility includes a Par 3 course, which promotes scoring and competition among the players.

“When we built the golf course they needed all the practice area for the 7th hole so the Nicklaus Group built a little Par 3 course for the team,” Jones said. It serves as a dual purpose as basically a short-game area but they can actually play holes and make holes-in-one and do different things.”

“It will be really cool for outings, which we haven’t been able to do yet with Covid,” Jones said. “We’d like to do (the donor outings) on game days, which would take 1.5 or 2 hours for people who don’t have time for a four-hour round.”

The men’s and women’s golf teams now head to Scottsdale, Ariz., where they will compete for the national championship.

The men’s team is currently ranked No. 1 in the nation and includes three freshmen, each of whom have played significant roles in winning the Regional title, with Brett Roberts, Frederik Kjettrup and Cole Anderson as well as graduate transfer Vincent Norrman.

Add it up and seven of the 10 Florida State players who will compete for the national championship are freshmen or graduate transfers drawn to Florida State University at least in part by the seven-figure investment the university made in the sport they love.

When asked what this facility means to attracting players, Georgia’s head coach Haack, said: “It is huge. I told Coach Jones I’m surprised if Florida will get any recruits from him now that he’s got this.” 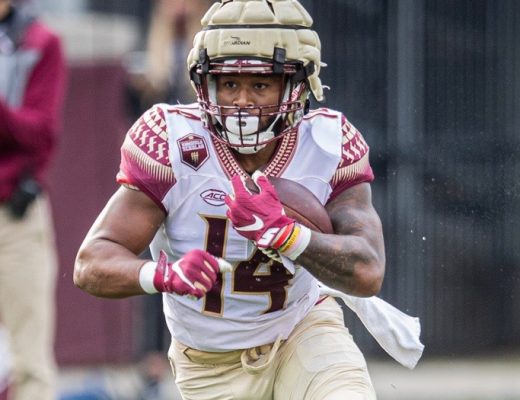 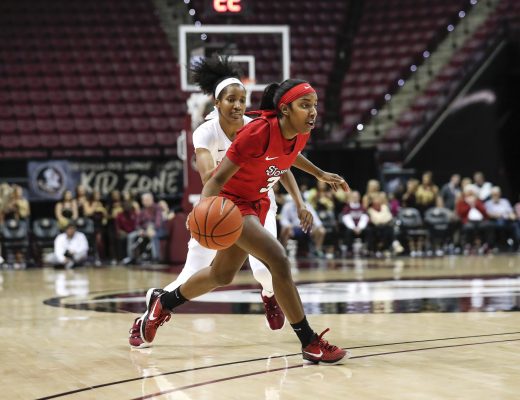