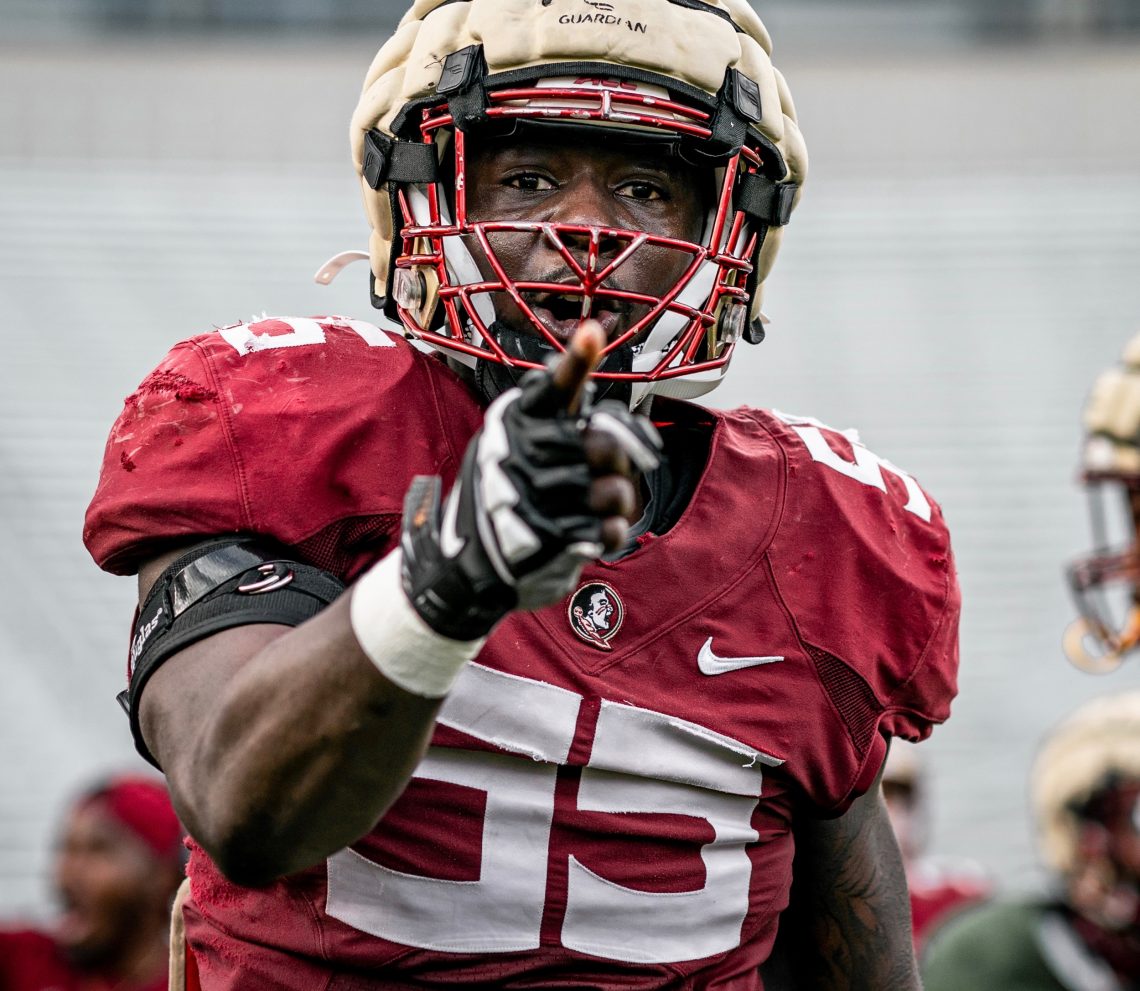 Florida State head football coach Mike Norvell often talks about the CLIMB, an acronym for football and for life that he’s been preaching since he has arrived in Tallahassee: C (commitment), L (little things), I (intensity), M (mental toughness), B (brotherhood).

Every time I see the CLIMB acronym, I think of the saying, “If you find yourself in a deep hole, the first thing you got to do is stop digging before you can climb out.”

If you tuned into to spring football game, you saw a 3-6 football team that has begun to lay its shovels down and that’s exactly what I have seen over the eight practices we were allowed to observe this spring.

“I truly believe that your identity as a football team starts forming now,” Norvell said. “The winter conditioning is big for our program, Tour of Duty, building mental toughness and physical development, that’s critical. You get out there at practice where you really don’t have an opponent. You have yourself, you have guys fighting at the position and then you have your teammates that you’re going against every day.”

Before we belabor the details, let’s talk about the important stuff.

Former defensive coordinator Mickey Andrews said the most important lesson he learned about winning came from his legendary college football coach Bear Bryant. “Before you can win, you have to quit losing,” Andrews said.

Throughout the 15 spring practices, eight of which were open to the media, Novell allowed us to become a conduit to you to witness the CLIMB in action.

Attending practice enabled us to share with you the signs of change this spring. The first thing we noticed is the players looked in better shape, a testament to commitment in the offseason program.

We saw better intensity throughout the practices. Rather than just intense coaches, we saw players beginning to lead too. We saw better attention to the little things and while still a work in progress for some players, better mental toughness.

Sure, there were bad plays in practice, and bad overall days, but Norvell used each opportunity to challenge the team with the question: “How will you respond?”

Recent FSU teams have not responded well to adversity and that has been a focus for Norvell.

Football coaches speak a lot about “playing for each other.” It takes time and respect to build the bond of trust and love that bind players into a team. After the game, at tailgates and on bar stools, former players talked about those bonds between teammates being critical to success. We won’t truly know how strong those bonds are until the fall, when adversity tests this team, but it looks to many inside the program that the process has begun.

Each step is critical “to stop losing.”

We heard McKenzie Milton was a “gamer.” When the spring scoreboard was on, and FSU fans were in the stands, Milton enjoyed his best performance of the spring. The former Heisman candidate, who has missed the last two years of football while rehabilitating a leg injury, swabbed the cobwebs with assertive throws, including a pinpoint touchdown pass to true freshman Malik McClain.

Offensive coordinator and quarterbacks coach Kenny Dillingham noticed the evolution throughout the spring.

“Constant improvement. Obviously, he knew football, but constant improvement,” Dillingham said. “You’re talking about a kid who hasn’t really played in a live setting or as close to a live setting in over two years, and in a new system. So every single day, he got a little more comfortable. He had his good days, his bad days, but he got a little more comfortable.”

Jordan Travis also had an excellent spring game with his arm as well as his feet as he lead the offense to two scores in his three possessions as well.

I flash back to when Mike Norvell signed Milton and predicted the former UCF quarterback would enhance Florida State’s quarterback room. His projection proved true. For any number of reasons, including natural progression, Travis is better than he was in the fall. The competition may also have helped.

“The growth in him, you can’t put it in words,” Dillingham said. “I could try to describe it. But I can’t put it in words. Not just as a football player but as a person, as a leader. As everything about him. I couldn’t describe. There’s not a word that would do it justice, the growth he’s made. And I talked to him yesterday. He’s raised his standard of just living in every aspect of his life. And he’s raised the standard of what a work ethic is on the field.”

After struggling with young quarterbacks in recent years, FSU will have two experienced and competitive quarterbacks going into the home opener against Notre Dame on Labor Day Weekend.

The offense’s winning performance in the spring game was a “response” to previous scrimmages, which were dominated by the defense.

“There are some negative plays, some of those self-induced, some of those tag mode the quarterback, which is part of the spring game, but most of the time we gave ourselves a chance to be successful, especially with that first group,” said Dillingham. “And that was something we didn’t do a lot of the time last year, a lot of time we had a lot of self-inflicted wounds.”

Receivers made plays in spring game

We have seen some great throws this spring bounce harmlessly off receivers’ hands, which is partly why the defense was winning the day. A key part of the spring game success for the offense was the performance of a receiver group, which has struggled with consistency. The segment room is large with candidates. On Saturday, two freshmen who entered in January — Malik McClain and Josh Burrell — were on the receiving ends of those great throws in tight coverage. It was encouraging to see them win those one-on-one battles coaches have been emphasizing.

Offensive line coach Alex Atkins continued to make strides this spring with the players not rehabilitating injury. It is clear who the likely starters on the offensive line will be when the Seminoles return in August, which you couldn’t do at this point last year.

Maurice Smith, Dontae Lucas, Devontay Love-Taylor, Robert Scott, Darius Washington, Brady Scott and Baveon Johnson are all veterans and will be the nucleus of the line. Thomas Shrader, a promising freshman, could help at guard or center if recovered from a leg injury.

The leader of the line, Love-Taylor, was not available, rehabilitating a leg injury sustained late in the season. Washington missed the first week and Shrader the last two weeks. While their absence hindered the continuity on the line this spring, they’ll get time in the fall to synchronize before the season. And their absence did give younger players, like Robert Scott, early enrollee Bryan Estes, Jalen Goss, Lloyd Wills, Chaz Neal and Zane Herring, more time with the first- or second-team line.

Pass protection did raise concern this spring but Norvell knew with players in and out of spring, continuity would be a problem.

“That’s one of the things we knew going into spring,” Norvell said. “Devontay (Love-Taylor), Baveon (Johnson) missed the first part of it, we’ve had some guys in and out and that’s part of it but we knew that the continuity wasn’t going to be something that was going to — that execution might not be where it absolutely needs to be,” Norvell said. “But the fundamental development is something that’s big. I was glad (Saturday) we got to throw Lloyd Willis out there with the first group some. It allowed us to look at a couple of different combinations, so I like where guys are headed. Yes, we are young, there’s no secret to it. But you see them developing.”

And, who knows, maybe the sacks are a result of quick whistles, or the defensive line learning the offensive line blocking calls throughout spring. Or could it be the FSU defensive line has improved?

We won’t know the answer to that last question until the Seminoles line up against Notre Dame on Labor Day weekend.

Ideally, you want to have at least eight offensive linemen you can depend upon to get through a season, which FSU has not had the last few seasons. It looks to this observer like Atkins has eight going into the fall who he knows everything about and they know everything about him. Are they ideal? Probably not every one of them but they are known and they are his and that’s a big improvement over past years.

Having 15 spring practices, rather than only three last spring, gave Norvell a chance to evaluate players in different situations and positions. He now knows what he has going into the fall, including at his skill positions.

The receivers who caught my eye throughout the spring included Malik McClain, Bryan Robinson, Keyshawn Helton, Ontaria Wilson, Kentron Poitier and Josh Burrell. You haven’t heard much about walk-on Parker Self but you may hear from him later in his career. The group will be joined by Destyn Hill, a four-star receiver, and Andrew Parchment, a transfer from Kansas, in the fall.

For FSU to improve on offense, two or three receivers need to prove they can get open in coverage like a Rashad Greene in 2013.

The Seminoles return a number of experienced tight ends, including Jordan Wilson, a UCLA transfer who sat out last season with a knee injury. Wilson participated in the last two weeks of practice (not the spring game) and looks like he could add another dimension to the offense.

The running back performances were solid in the spring. While there does not appear to be a home-run threat, each are dependable runners and pass receivers.

Last year’s 107th-ranked unit, which looked to the portal and spring football for improvement in the creation of sacks and turnovers, found some answers.

While the offense did get the better of the defense in the spring game, the defense won scrimmages throughout spring practice.

The loss of Emmett Rice (leg injury) in spring hurt. Norvell said in March that Rice will miss an “extended period” of time.

So much of defense is attitude and effort, which will go a long way to making the Seminoles a better defense in 2021.

“I like what I’m seeing,” said Norvell after the spring game. “The steps up front, I think Jermaine Johnson showed even early today that he’s a force to have to handle there off the edge, in the run game, in the passing game. I think Dennis Briggs, Fabien Lovett, those guys are a year stronger, a year more confident through the understanding of what we’re asking them to do schematically. Derrick McLendon, he’s had a really nice spring with the opportunity he’s been presented. I think he’s continuing to grow and get better. The constant competition is pushing guys to improve. Now it’s just trusting those fundamentals play-in and play-out, knowing where you need to be and being able to apply those fundamentals in the moment.”

FSU has a veteran punter and kicker returning. FSU also invested an appropriate amount of practice time to special teams in general this spring, so one should expect the special teams, which were much better last year, to continue to play well again this year.

Mike Norvell found himself in a hole when he arrived in Tallahassee 16 months ago. While the cancellation of spring practice delayed FSU’s CLIMB out of that hole, spring practice leads us to believe the team is now taking steps along that journey. 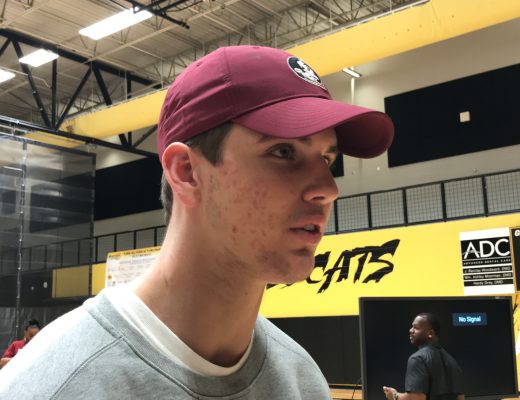